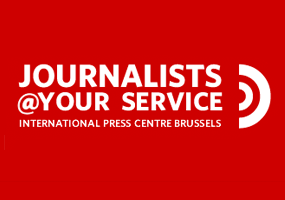 The first steps for a journalist in the ‘Brussels bubble’ can be challenging. In one of the world’s largest political and media power-centres, there are certainly some aspects such as the specific terminology or the media-bureaucracy that can be difficult to deal with at first.

J@YS (Journalists at Your Service) together with API-IPA (International Press Association) organize twice a year a Briefing for Newly Arrived Journalists in Brussels, to help them to deal with the European Institutions and NATO and find their way around in their daily life. This year, the second conference was held at the Residence Palace on the 30th November.

The one-day programme included sessions with speakers from the European Commission, Parliament, Council, and NATO, as well as other experts on day-to-day issues such as dealing with taxation and social security in Belgium.

Maria Laura Franciosi, the honorary president of J@YS, explained to the audience that her first meeting in the Commission was “shocking.” Franciosi explained that she had come to Brussels thinking, “I knew everything,” but at her first press briefing – she was lost. “I didn’t understand, they were using abbreviations.” Brussels is known for its jargon, with a Wikipedia page existing to keep track.

Talking about the role of API, Hans Debruijn, the organisation’s Secretary-General explained the organisation stands ready to help. If there are any problems between journalists and EU institutions “it comes to our table,” he explained.

Guy Milton, Head of Unit of Media Relations for the European Council, spoke to journalists about the challenging role of providing communications support to the institution which has garnered increased media attention in the last years with the economic crisis and UK’s Brexit vote.

Warmly welcoming was the European Commission’s Daniel Rosario. Rosario, who can usually be found in the Berlaymont press room every midday talking about the trade and agriculture portfolios, took the time to explain the role of the spokesperson service. “We are there for every kind of question,” he told the room, showing the service’s openness when it comes to journalists. “I hope you can rely on us to do your jobs,” he confirmed.
As an information hub and advice centre, J@YS and API reach out every year to the arriving journalists to help them get started with their new professional careers and their new daily life in the capital.