A pioneer amongst the EU correspondents, Ferdinando Riccardi, of Agence Europe, left us at the age of 89.  Our former President, Michel Theys, wrote a farewell in the Agence Europe bulletin of September 26, , tracing Fedi’s long career. We reproduce it here with our thanks to Michel Theys and Agence Europe. 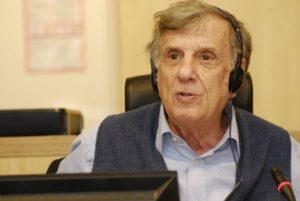 Agence Europe is in mourning: Ferdinando Riccardi died in Brussels on Friday evening 22 September. With his passing, we have lost a journalistic colossus, a humanist of great culture and a passionate European.

Born in Turin on 21 November 1928, Ferdinando – “Fedi” to all the habitués of the press rooms of the European institutions or who were privileged to work alongside him – began writing early: with his elder brother, working on their little type writer, he urged the Italian people not to obey the Mussolini regime which was asking them to take up arms to defend northern Italy after the allied landing in the south. His brother was arrested and died, aged 16, in a concentration camp.

As he revealed at Cafébabel in July 2007, this trauma could easily have pushed him to bitterness or hatred towards Germany. But no, because this lover of Dante already also loved German culture and more broadly the great figures of European culture, from Praxitèle to Shakespeare to Bach and all the composers of bel canto, which he continued to enjoy throughout his life. His friends know well how inexhaustible he could be when praising the purity of voice of Maria Callas.

A man of culture, Fedi also loved sport. To fund his modern literature studies at the University of Rome, soon after to be named La Sapienza, this tennis fanatic – he played the sport into his sixties – and, how could it be otherwise for someone born and bred in Turin, great supporter of Juve, cut his teeth as a cub sports reporter. He never lost the bug: in the mid-1950s, he was in Paris covering the sports news for various Italian outlets.

At the end of 1957, the family business and, through it, Europe beckoned. The interest of his father, Count Lodovico Riccardi, Chairman of the Italian press agency ANSA, had been piqued by the European project that Jean Monnet and Robert Schuman had launched in 1950. His interest was indeed so great that he asked the head of ANSA’s Genoa office, Emanuele Gazzo, to move to Luxembourg and become the top journalist of a new press organisation, Agence Europe, which had been formed in December 1952, only a few months after the High Authority of the European Coal and Steel Community had set up office in the capital of the Grand Duchy. The Community’s president, Jean Monnet, soon had to learn to deal with this Agence Europe, which often annoyed him with its scoops but whose credibility grew, as a consequence, very quickly in those places where Europe was continuing to be built. The European Economic Community and the European Atomic Energy Community, Euratom, would soon be born. However, it was in Brussels, not in Luxembourg, that these two new bodies would reside.

Ferdinando Riccardi accepted the offer made to him to move to the Belgian capital where he would open the offices of Agence Europe in 1958. He would never leave it, or Brussels. The sports journalist had definitively become the European journalist.

From that time on, Fedi would be a constant visitor to the various European institutions and would put his head around the doors of spokespersons and officials who, very quickly, appreciated the rare kindness that was his and the reliability he delivered as a journalist. From the offices in the avenue de la Joyeuse Entrée to the Berlaymont, from the Charlemagne building to the Breydel and the Justus Lipsius, he became one of the leading lights in the press rooms, always on the look-out for little extra pieces of information, for the clarification that would make his article a must in the European microcosm. After becoming editor at the end of the 1980s and leader writer following the death of Emanuele Gazzo in 1994, he continued to mingle with his peers in the “midday briefings” and press conferences, becoming a figure respected by the commissioners and ministers he had come to hear. The respect he had for Commission President Jacques Delors was very much shared.

Fedi Riccardi never ceased to look upon the Europe that was being built with anything other than confidence. In his “Behind the news”, which he prepared and wrote until 2015, he always strove to see the positive, to observe the little steps of progress which, no matter what, and often alone against all the others, gave him cause for optimism. Until the end, he viewed European construction as a project for peace based on reconciliation. Until the end, he wanted to believe that good sense would never allow Europeans to do anything to harm this European revolution, the only revolution on which this humanist placed any value.

Today, all the members of Agence Europe are in mourning, their thoughts with Fedi’s wife, his five children and his family. There is no doubt that the thoughts of Agence Europe’s readers and of many of those whom he knew in the institutions will be, too.