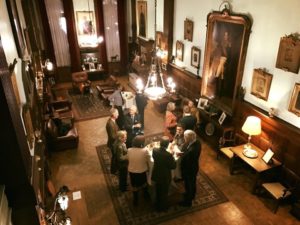 After welcoming you into this exceptional military decor, the event will start with a short presentation of the recent book by the vice-president of the French AEJ section, Nicolas Gros-Verheyde, and short intervention(s)-comments by some fellow-journalists.

Nicolas is correspondent EU and NATO for French newspaper Sud-Ouest and chief-editor for B2 Bruxelles2, a Francophone website on European politics (foreign affairs, defense and crises).

AEJ plans a series of interviews with Nicolas and other experts. These interviews taken by AEJ members will be made available on the web as extra background resource for fellow journalists, academics and citizens having an interest in the CSDP of the EU.

Holland House is a new initiative of the Dutch EU professionals in Brussels so set up their own house for community building, networking and debate. The Club Royal des Guides hosts them temporarily but is the Mess of the Officers of the 1st Regiment of Guides (1874-1994), established on the Place Luxemburg in Brussels, its initial garrison town. The military members meet each other there and hold events remaining attached to the values ​​of the Cavalry, sharing its values ​​and traditions.

Be all welcome but please register at info@aej-belgium.eu under subject autumn cocktail 17’.

Note: access to the venue is at the condition of “tenue de ville” (for men: tie and jacket) according to the above mentioned values and traditions of the Club.