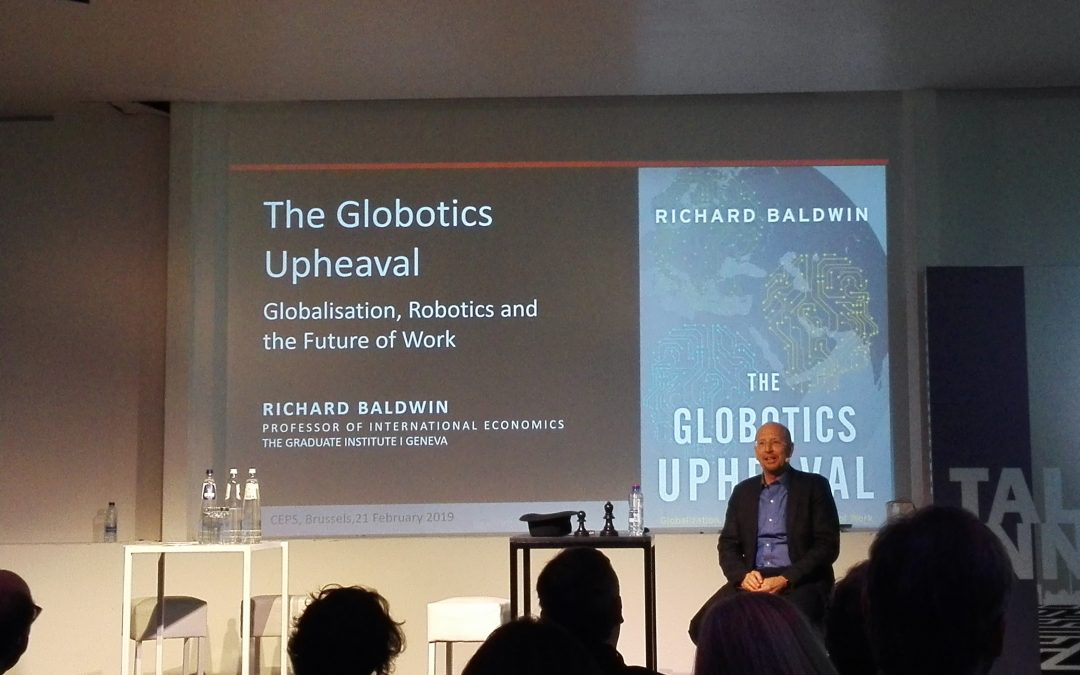 Digital technology has totally transformed our lives in recent decades and is already – and will continue to – affect journalism. During a lecture as part of the Centre for European Policy Studies’ (CEPS) Ideas Lab on Thursday, 21 February, Richard Baldwin, Professor of International Economics at the Graduate Institute in Geneva, talked about how digital technology will change the ways in which work is distributed in the future and why this is not necessarily a development to be feared.

Artificial intelligence (AI) algorithms are changing journalistic research through automatic content analysis from massive data sets. Automated news writing and distribution has already become a reality. For example, by the end of 2017, the Washington Post’s robot reporter had published 850 stories in a year and at the end of 2018, China launched the world’s first AI news anchors. This is why it is important for journalists to keep an eye on digital technology developments. By monitoring developments, journalists can identify the threats posed by it but also see how it can work as an enabler of journalism and especially of investigative journalism.

Food for Thought: the Globotics Upheaval

During his “Food for Thought: the Globotics Upheaval” lecture, Richard Baldwin, Professor of International Economics at the Graduate Institute in Geneva, presented his new book, entitled “The Globotics Upheaval: Globalization, Robotics, and the Future of Work”. In his work, he talks about how digital technology will change the ways in which work is distributed in the future and why this is not necessarily a development to be feared.

The lecture took place as part of the Centre for European Policy Studies’ (CEPS) Ideas Lab on Thursday, 21 February. CEPS is a Brussels-based leading think tank and ​forum for debate on EU affairs. The Ideas Lab is the think tank’s most high-profile event, bringing together some of Europe’s top decision-makers and thinkers to discuss the most pressing issues confronting the EU.

“The future is unknowable but also inevitable”

Richard Baldwin began his lecture by stating the situation now is very different from previous years in that digital technology is advancing like Information Communications Technology (ICT). But while work during the process of ICT tended to be mostly physical, including a bit of intelligence and communication, during the digital technology era things will be the other way around.

“And it is coming very fast,” said Mr. Baldwin. Whilst in 2015 computers were not yet able to read and speak, in 2019, they are able to do so. He added that “humans think about progress instinctively as linear, yet, digital technology actually grows exponentially”. Programming has changed from coding, which basically means “thinking slow” to machine learning; “thinking fast” – certain things we do without thinking about them, such as catching ourselves when we fall. “This is a radically different way of programming computers,” noted Mr. Baldwin.

Globalization, Robotics, and the Future of Work

The ‘globotics upheaval’ describes a combination of globalization and robotics, of telemigration and white collar robots (AI). Telemigration refers to people sitting in one country and being able to telecommute into foreign workplaces to compete for service and professional jobs. A white-collar worker is a person who performs professional, managerial or administrative work – such as business management, stockbrokers, or accounting – hence, work that is usually not related to manual labor or customer interaction. White collar robots then refer to AI-trained computers that have been programmed to execute many of the same white-collar jobs, replacing lots of office jobs.

These developments are supported by, e.g. instant machine translation such as Google Translate or YouTube auto-translated captions. They are melting language barriers so that the ranks of these ‘tele-migrants’ might soon include almost every educated person in the world, no matter which languages they speak. They are complimented by high-end white collar robots, such as Amelia or Watson, which will even affect the most intellectually demanding  types of jobs such as those performed by e.g. lawyers, engineers and journalists.

While many people see these developments as a threat to our society, driving inequality, unemployment, and even populism, Mr. Baldwin wanted to make clear that this negative focus is not justified. “It won’t look like Janesville,” he said. “There will be no mass unemployment rust belt style”. Many tasks will be taken over by digital technology, but no occupations will be. In his view, new jobs that we do not yet know that we will need will be created through digital transformation: “Globots will do what they can. And we will do what globots can’t”. Hence, for Mr. Baldwin, it is more important to focus on what globots cannot do: “Machine learning is the jet engine, but big data is the fuel. Structured data is hence the key limitation of AI”.

Moreover, Mr. Baldwin compared the development of digital technology to what he called “iPhone infiltration”. Smartphones have completely changed our lives, from work to personal relationships – but it just happened. Nobody has decided to let it happen. Instead, it developed through millions of uncoordinated decisions that had been made individually. Mr. Baldwin: “I think robots will come into our workplace that way and five years later we will think ‘how did we ever get along without them?’”

However, Mr. Baldwin also sees threats in the new technologies. “They will seem very unfair. They will not pay taxes or ask for days off and they will work 24/7. This may lead to a problem,” he said. “Right now, immigrants and China are used by, for example, US presidential candidates to orientate the anger of the people. But I am curious how politicians will make use of technology to reorientate people’s anger against technology. It seems very tempting”.
Anyone who would like further information on the topic can find the first chapter of Mr. Baldwin’s book for free on Google Books.