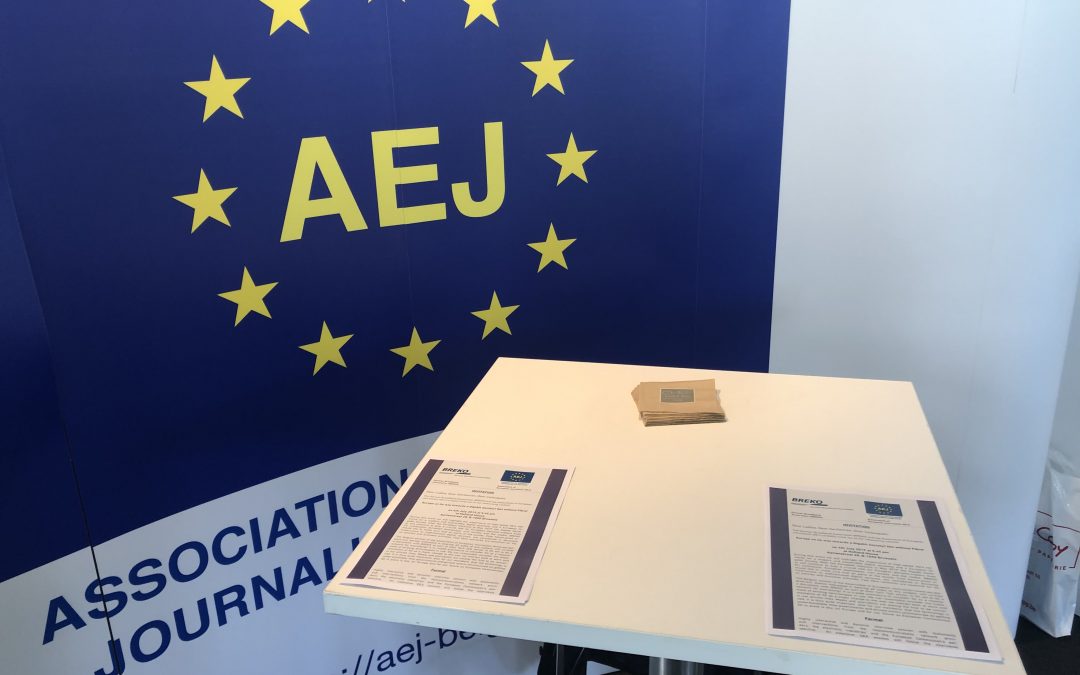 After many years of absence the AEJ returned to the European Business Summit. It was the perfect occasion to promote our upcoming tech talk on 5G next 4th of July.

The annual European Business Summit at the Egmont Palace in Brussels brings business and politics together to discuss challenging issues on the European agenda. As a business-driven event it aims to show that business can play a major role in solving European problems. It offers a place for business representatives to discuss with EU decision-makers and to contribute to policy making. Invited speakers range from activists to NGO representatives to ministers, which ensures a broad mix of topics, but some themes reoccurred during the two days of the summit. We have summarised them here.

Following up on the 2018 EU-Africa business summit in Marrakech, and preparing for the upcoming 2nd summit in November 2019, a roundtable discussion was organised during the first morning of the two-day business summit. Several panels discussed different perspectives with regard to economic relations between African countries and the EU, focusing on investment opportunities and trade. Speakers in the high-level session included foreign ministers from Belgium, Morocco, Ivory Coast, Benin and Rwanda. A specific session was dedicated to agriculture. Here, the panel discussed different business models, trade rules and policies but also how to make agriculture attractive.

Africa is the youngest continent in the world and will need to be able to feed its growing population but could also become a major food exporter. Maria Angeles Benitez Salas, Deputy Director-General at the Agriculture and Rural Development Department of the European Commission, pointed out that decentralisation is important in African countries’ rural development policies. The European Investment Bank has a presence in nearly all African countries but agriculture has been seen as a risky investment, according to Heike Ruettgers from the European Investment Bank.

Climate change: A business opportunity or end of business-as-usual?

The urgent need to tackle the issue of climate change and to comply with sustainable development goals is high on the agenda, not only for the sake of securing a safe operating space for humans, but also because the fossil fuel business needs a sustainable vision in order to maintain its credibility. The Brussels SDG summit was held for the third time in partnership with the European Business Summit, but the question of climate change surfaced in several sessions and the positions on how to tackle it varied considerably.

“Climate change is a business opportunity,” said Ricardo Borges de Castro, an advisor at the European Political Strategy Centre at the European Commission, referring to the opportunity of green technology development. André Sapir, a professor at the Solvay School of Economics and a senior fellow at the think tank Bruegel, had a similar view, pointing out that “technology is the joker” in the decoupling of externalities from economic growth.

Great to be part today of @ebsummiteurope panel ‘Europe is voting: make it your business’ & discuss key trends identified in new #ESPAS report.

Beyond a #StrategicForesight document, it is also a tool to better inform European voters: https://t.co/6br7403pit#ThisTimeImVoting pic.twitter.com/39AsYnapyo

However, economic historian Mattias Schmelzer, who is affiliated to the Friedrich Schiller University Jena and the University of Zurich, did not agree. “There is no empirical evidence that technological solutions will solve climate change,” he said. Patrizia Heidegger, director of global policies and sustainability at the European Environmental Bureau, pointed out that the relationship between economic growth and sustainability is an issue of debate in situations where business stakeholders believe in green growth, adding that the lack of a real price target for pollution remains a problem.

Social inclusion and social justice: Are we seeing a crisis of capitalism?

The gap between citizens and the EU institutions is an issue both inside and outside the institutions. Forecasts estimate that EU-sceptic parties will claim one third of the seats in the European Parliament elections while the ‘yellow vest’ movement has been used as an image to demonstrate that capitalism is in crisis. Social inclusion and social justice were discussed in several sessions.

“Growth models have not delivered what they promised,” said Karl Pichelmann, senior advisor in economic and financial affairs at the European Commission, citing the brain drain from certain European countries as “an example of a distributional problem”.

Strong message that resonated at our #EUelections2019 debate:
We should be more engaged, communicate and explain Europe better – #SingleMarket, international #trade, our common values #EBS2019 pic.twitter.com/HCK3j0Qy1r

Henryka Bochniartz, president of Lewiatan, said: “80 per cent of [Poland’s] exports are to Europe, but this information has not been transferred to a wider public”. She further added: “We can’t only pay attention to business, everything we touch is political.”

Fredrik Persson, chairman of the Confederation of Swedish Enterprise, did not agree. “We are not politicians. Our focus is, and should be, to build strong companies,” he said, adding that the creation of new jobs would pull the rug out from under the feet of populists.

Europe after the elections: “Europe needs a common vision”

With the European Parliament elections taking place three weeks after the summit, the outlook for Europe and its role in the world naturally made it into the discussions. Several speakers expressed the need for a common vision for Europe while others were discussing how to protect the election from the problem of misinformation.

Europe has three major advantages:
1. We take care of humans better
2. We take better care of the planet
3. We have an incredible cultural heritage #EBS2019 @PierreGattaz @BusinessEurope

“Every European country is a small country compared to China, Brazil, India or similar economies,” said Ricardo Borges de Castro, advisor at the European Political Strategy Centre, adding: “We need to make this election our business or we will be out of business.”

Pierre Gattaz, the president of BusinessEurope, agreed. “We need a narrative for Europe,” he said, adding: “We should be proud of Europe, we take care of human beings and nature, we have a cultural asset and we have invented everything we use.”

Thank you to all of the participants who attended #EBS2019
Next year is our 20th anniversary! We hope to see you all there.
To view a selection of the pictures click https://t.co/upMBI0wiEG pic.twitter.com/uxIH493tZH

By Sara Johansson and Lune Bernstein