EBU Media Talk: “Engaged voting is the cornerstone of democracy’’ 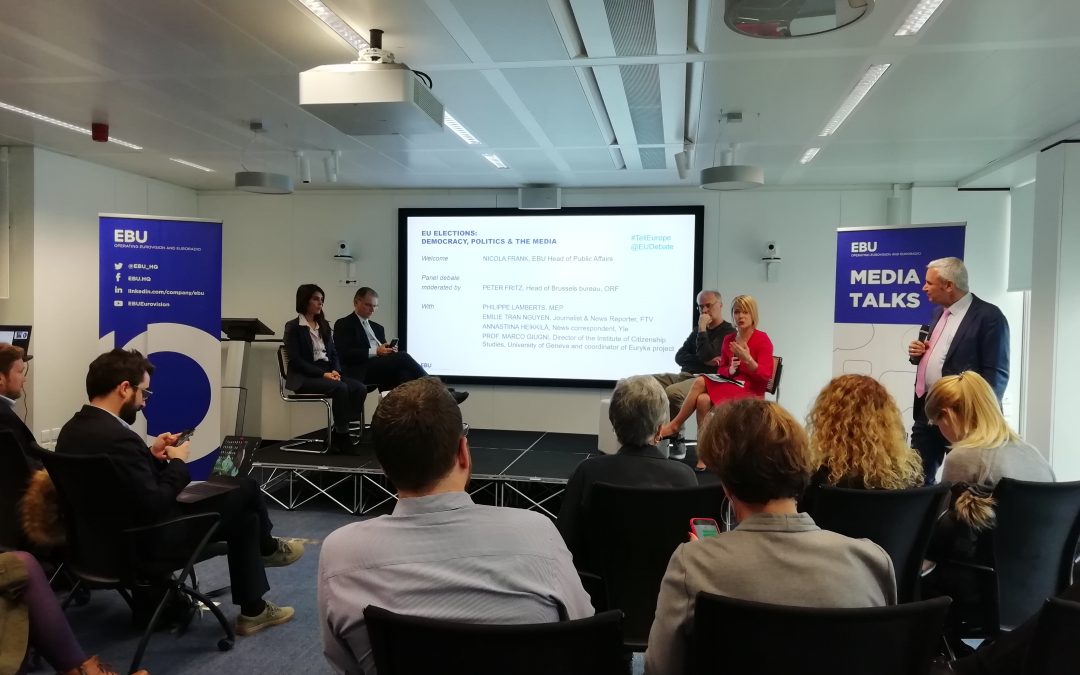 On April 4, 2019, the European Broadcasting Union (EBU) hosted a Media Talk on the European elections regarding democracy, politics and the media. The evening was presented by Nicola Frank, the head of EBU public affairs, and the debate led by Peter Fritz, a journalist for Östenreichischer Rundfunk (ORF), four speakers took the floor.

“In times of manipulation and disinformation engaged voting is the cornerstone of democracy”, said Frank, opening the conference. For the second time the EBU will broadcast the live debate of the lead candidates for the Presidency of the European Commission throughout Europe. The debate will be held on May 15, 2019, and include – in the order in which they will be speaking – Nico Cué, Ska Keller, Jan Zahradil, Margrethe Vestager, Manfred Weber and Frans Timmermans.

Emilie Tran Nguyen, a French TV journalist who will be moderating the live debate with co TV anchors, Markus Preiss and Annastiina Heikkila, sees her role, as a journalist, to humanize the elections. “A lot of people do not feel represented in Brussels. It’s important to realize that whole Europe will be watching the debate and not just the Brussels bubble,” she stated during the EBU Media Talk event.

A key factor during these elections is social media. Annastiina Heikkila, Finish news correspondent for the Yle, will be moderating social media during the spitzenkandidaten debate. Heikkila says of the job that, “It’s not going to be easy, with fake news and new technology it will be a big challenge. Fact checking everything will be more important than ever.”

Also  participating at the media talk was Marco Giugni, the director of the Institute of citizenship studies and coordinator of Euryka project ‘Reinventing democracy in Europe: youth doing politics in times of increasing inequalities’. Giugni is especially interested if and how young adults will vote during the upcoming elections. “Politicians aren’t really that interested in doing something for young people. They see them more as objects instead of subjects,” he commented. Guigni goes on by explaining that there is not only a gap between young adults and adults: “Even within the young generation there is a gap between the ones that are rich and those who are not, which will have impact in the way that they will vote.”

The fourth speaker was Member of the European Parliament and leader of The Greens/European Free Alliance, Philippe Lamberts. As the only politician at this media talk, Lamberts talked among other things about the importance of authenticity. “All politicians want to look good. It causes debates to be boring, it’s all just more of the same,” he lamented.

In the debate that followed, one journalist pointed out that the voters of the far right will not be represented during the debate, when especially now the far right movement is more popular than ever.

One of the interesting discussions had during the debate, was how winning tactics and strategies of the new wave of leaders like US President Donald Trump, and French President Emmanuel Macron can be used by other parties without causing a shift of these parties along the political spectrum.

For more information on the Eurovision-broadcast debate you can also check the EBU website.