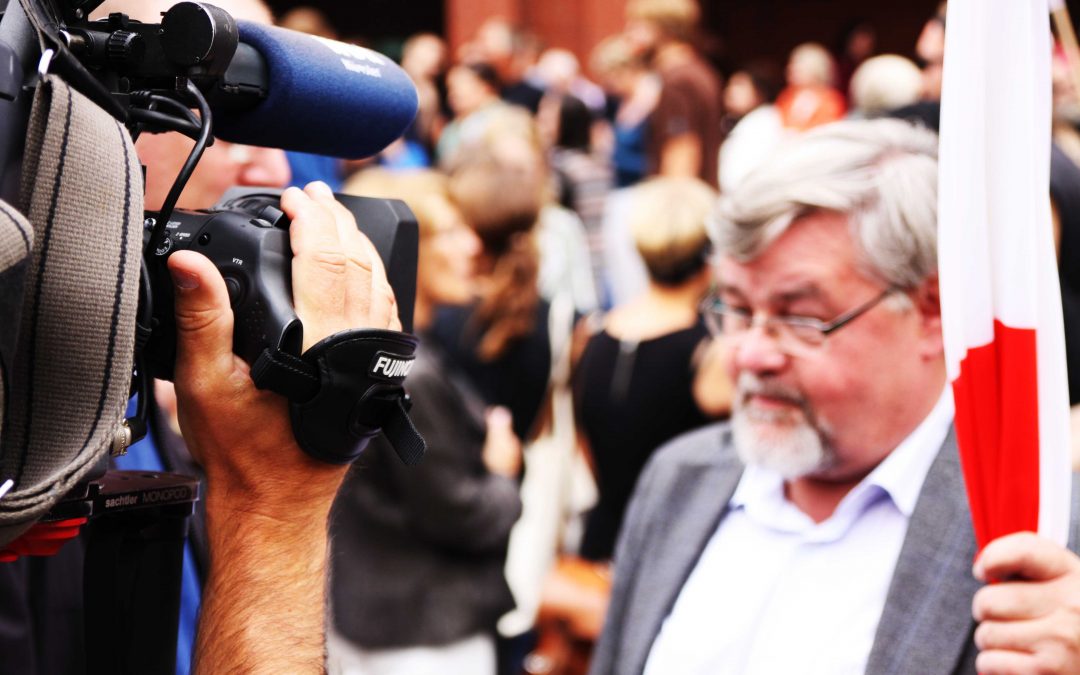 AEJ Belgium celebrates World Press Freedom Day contributing to spread the word of the event Difference Day that took place in Brussels on 3 May. The interviews with the participants of the DD event will be published soon.

The Romanian Section of the AEJ (AZIR) celebrates World Press Freedom Day with a special event on 7 May focused on journalists’ dealing with those who wield political power. For the first time, the AZIR Prize for the Independence of the Journalist will be awarded. The winner will be Tia Serbanescu, one of the most free spirits of contemporary Romanian journalism. Tia writes incisively and with humour about the society around her and the unedifying spectacle of Romanian politics today, maintaining her independence and exposing the follies and weaknesses of all political sides with equal candour. The event will be attended by AZIR members, fellow-journalists, media experts from the University of Political Sciences and the University of Journalism, and others who are committed to strengthening and protecting independent journalists who now have to work in difficult and often hostile environments.

AEJ Italy. A public celebration of World Press Freedom Day will be held on 10 May in the Italian parliament in Rome with a focus on improving journalists’ protections.  The title of the meeting with senior politicians and journalists is “So much Mafia, so little news” and it is promoted by “Ossigeno per l’Informazione” with the patronage of UNESCO. It will take place in the most prestigious hall of the Italian Parliament, the Sala della Regina of the “Camera dei Deputati”. This is the fifth year that Ossigeno is celebrating this important event in this way. The speakers include journalists, Members of Parliament, representatives of publishers, trade unions, inter-governmental organisations, public institutions at the national level, NGOs, media organisations, academia and lawyers. The opening speech will be given by the Honourable Roberto Fico, President of the Camera dei Deputati. Among  other speakers are: Senator Pietro Grasso, former President of Senate; Marco Del Mastro, Director of Statistics at AgCom (the Italian Authority for Communications); journalist Marilu Mastrogiovanni (jury member for the Guillermo Cano World Press Freedom Prize), journalist Maria Grazia Mazzola (who was assaulted while reporting on the Mafia) and Fabrizio Petri, President of CIDU (the inter-ministerial  committee for Human Rights.). Ossigeno will provide new findings on gender-based threats against journalists. It will also release the special report  “So much Mafia, so little news” based on the recent Fact Finding Mission in Italy carried out by the European Centre for Press and Media Freedom (ECPMF) with the support of the European Commission (DG-Connect). This report explains the Italian system for protecting journalists, how it works, what are its weaknesses and the merits that make it (according to UNESCO’s Media Director) one of the best in the world. The report also formulates new proposals to extend protection and strengthen the safety of professional reporters.

AEJ Poland and Polish Society of Journalists declare ‘blatant’ pro-government bias in public TV election coverage. On World Press Freedom Day AEJ Poland journalists announced interim results of an exercise in ongoing monitoring of media coverage of the forthcoming European Parliament election. They also appeal for consideration to be given to a new system of European Union monitoring of media coverage elections in order to prevent suspected ’rule of law breaches’ by Poland and other EU states. AEJ members Andrzej Krajewski and Krzysztof Bobinski are working together with the country’s Society of Journalists to monitor Poland’s main public service TV news programme ahead of European Parliament elections on May 26. In their provisional interim report Krajewski and Bobinski say their monitoring shows massive bias in favour of Law and Justice, the country’s ruling party.

AEJ Greece. On the occasion of the international day of Freedom of Press on 3 May, Europe’s Day on 10 May but also European Elections, the Greek Section of the Association of European Journalists will organise an event at the office of European Parliament in Athens on Friday 10 May. The purpose is to discuss the following issues:

A dialogue will be held among distinguished speakers in order to exchange views on the current situation in the Media as the freedom of the press is continuously in danger. This event is addressed to professional journalists, representatives of news organisations, young journalists, journalism students, students and young people.

In the UK the AEJ has responded jointly with Index on Censorship to urge the British government to rethink its proposals for new, wide-ranging regulation of “online harms” as set out recently in an online harms white paper. The government’s outline proposals are that a new legal duty of care by platforms would be established covering a very broad range of “harms”, for example, disinformation and violent content. In combination with substantial fines and potentially even personal criminal liability for senior managers there I concern that it would create a strong incentive for platforms to remove content proactively – including news stories that might be deemed ‘harmful’ by the proposed new regulator although their contents are not illegal.

Other proposals in the white paper may also have damaging impacts on media freedom, such as potential ISP blocking (making a platform inaccessible in or from the UK). The draft provisions for ensuring the protection of users’ rights online, particularly freedom of expression, rights to privacy and the public interest are now sketchy and inadequate, and they need to be robust, detailed and provided for in law.

The government’s proposals were the subject of a media freedom alert on the Council of Europe’ Platform for the safety of a journalist on April 25.

Index on Censorship and the AEJ have asked the government to provide in unequivocal and concrete detail how it intends to establish such safeguards to make the future system of online regulation compatible with the UK’s obligations to uphold journalism and media freedom.

The alert can be viewed here:

Also in the UK, the National Union of Journalists (NUJ) will pay tribute to the life and work of the murdered Northern Ireland journalist Lyra McKee. The event take place on the evening of May 3, with NUJ general secretary Michelle Stanistreet, and other speakers at the Free Word Centre in London. Funds raised by ticket sales will go towards the International Federation of Journalists Safety Fund.

On World Press Freedom Day the occasion will be an opportunity to review the range of challenges and threats facing journalists and press freedom throughout the world, and to pay respects to journalists who are currently in prison as well as to those who paid the ultimate price in the line of duty.

The relationship between the press and democracy will be the main theme of this year’s edition of World Press Freedom Day (3 May) jointly organized by UNESCO, the Ethiopian government and the African Union Commission in Addis Ababa (Ethiopia), from 1 to 3 May. More than one hundred events will also take place around the world in observance of the day.

How can journalism rise above emotional content and fake news during an election? What should be done to counter speeches demeaning journalists? To what extent should electoral regulations be applied to the internet? This year’s World Press Freedom Day, whose theme is “Media for Democracy, Journalism and Elections in Times of Disinformation”, will be the occasion to reflect on these current issues.

Among the highlights will be the UNESCO/Guillermo Cano World Press Freedom Prize award ceremony on the evening of 2 May. The prize will be awarded, on the recommendation of an independent international jury, to imprisoned Myanmar journalists Kyaw Soe Oo and Wa Lone by Audrey Azoulay, in the presence of Ethiopian Prime Minister, Abiy Ahmed, and African Union Commission Deputy Chairperson, Amb. Kwesi Quartey.

This year, UNESCO also launched the Defend Journalism Campaign that encourages media to show their solidarity for a free and independent press through the use of banners on their printed publications and digital platforms.